This my friends is a good one!  Great flavor, fairly quick to put together and it's a nice change up from your everyday meals.  Pardon the simple cell phone picture.... 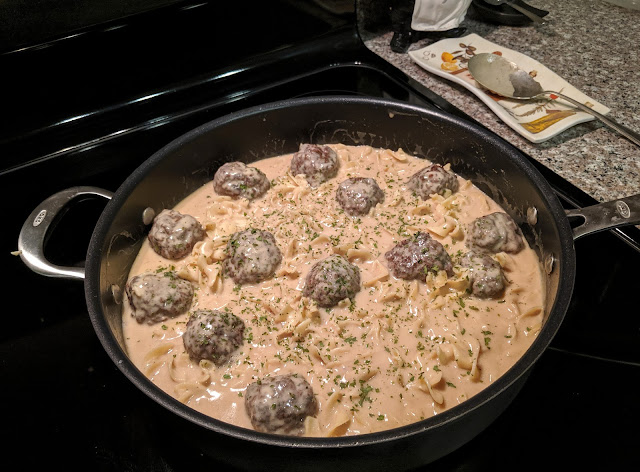 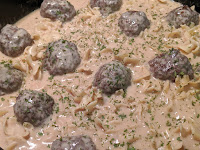 2.  Roll into 12 large or 20 small meatballs.  In a large skillet, heat olive oil and 1 Tbsp. butter.  Add the meatballs and cook turning continuously until brown on each side and cooked throughout.  Transfer to plate and cover with foil.

3.  Fill a large pot with water and follow the package directions to prepare 4 servings of noodles.  Drain.

4.  Add 4 Tbsp. butter and flour to skillet and whisk until it turns brown.  Slowly stir in beef broth and heavy cream.  Add worchestershire and mustard and bring to a simmer until sauce starts to thicken.  Salt and pepper to taste.   Add noodles into the skillet and simmer an additional ten minutes.

recipe c/o:  www.therecipecritic.com
Posted by Chris at 10:41 AM No comments:

I recently had the pleasure of working with a bride to create her signature look for her wedding day.  She had purchased a sample gown at a local wedding shop, but wanted a couple of modifications done to it.  In addition, she really was looking to have two different looks for the day.

She wanted one look for her "first look" and reception and an entirely separate look for the ceremony.  Let me share how our collaboration went........but first, let me share a picture of Alex from this past weekend! 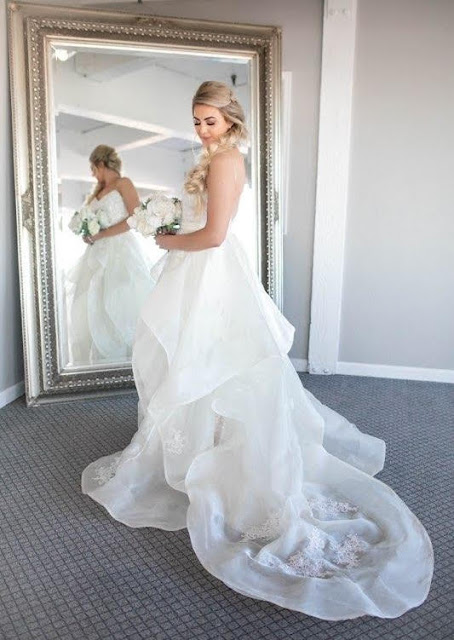 This is her ceremony look.  Isn't it gorgeous?   Very romantic, feminine and dramatic!  Just what she had hoped for. 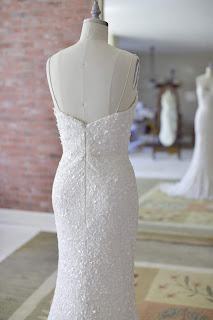 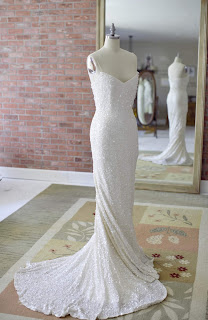 When Alex first came to me she brought with her the sample gown that she had purchased.  A beautiful sequined gown.  Since it was a sample, it needed a little TLC.... repairing areas where the sequins had totally fallen off,  and the straps were also completely frayed and stained.  As for the style itself, Alex felt like she wanted a lower back bodice and also wanted something at the waistline, but didn't know quite what it needed.
I agreed that it could use something, but I also didn't want to compete with the sequins.  They really shimmered so beautifully.  So,  I took out a 1½ inch ivory ribbon and tied it at her waist with long tails down the back of the gown.....and that was it. 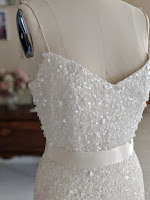 When I did that, she absolutely loved it!  It truly transformed the gown and gave her the additional waistline accent she was looking for.  Understated, but elegant. 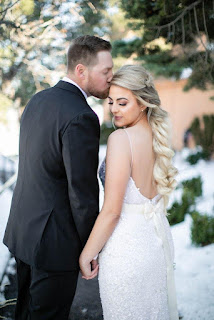 Lowering the back bodice and creating more of a "v" shape, was also transformative.  It really showed off Alex's back and created a much more flattering line for her.  And of course, by removing those bodice  pieces I now had the sequins I needed to repair the bare areas where they had completely fallen off the gown...I replaced the straps with new ivory rattail and the gown looked amazing!

At that same initial meeting, we began chatting about her vision for an overskirt.....when she originally reached out to me she shared a couple pictures of a tulle overskirt....but, once I saw the sequined gown she landed on and we chatted more about how she and her fiance' envisioned their wedding day, I knew she needed something much more dramatic....... Enter the large organza overskirt! 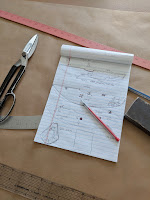 This was a challenging, but exhilirating project for me.  When I shared with her what I thought she needed (I may have used the terminology "let's Beyonce this thing!") she was really excited.   I knew organza with a horsehair hemline and lace accents would really create this statement piece that she was looking for! 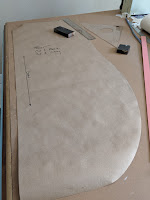 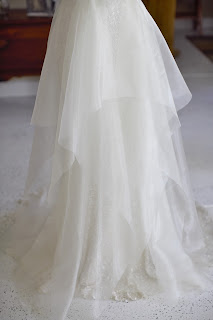 I spent a lot of time draping fabric on Beulah (that's my dress form) to get the look I wanted.  Those fabric pieces then needed to be converted and perfected into the actual pattern pieces; they ended up being some of the most unusual pattern pieces EVER!       Once I had my pattern pieces created, I was able to determine how much organza and horsehair I'd need.......how about 18 yards of organza and 11½ yards of  horsehair.  Oh....and I had to order the horsehair from England!! 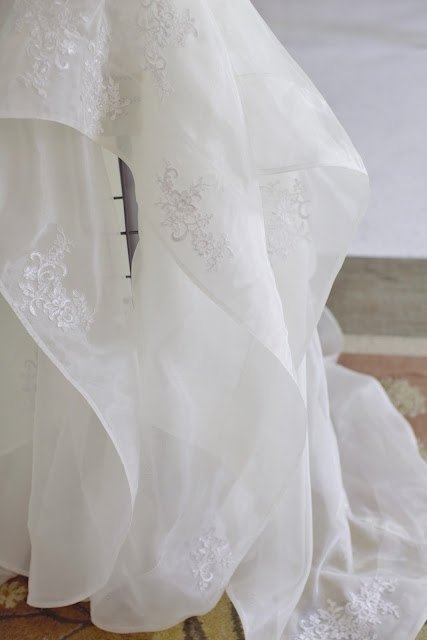 The picture to the right is the overskirt prior to sewing the horsehair to the hemline.  I actually love this overskirt as well....very dreamy, and romantic....I've worked with horsehair a lot...but it still amazes me how it totally transforms the look and shape of a garment!


Once the horsehair was in place, I began pinning the 20 lace appliques into place.  Doing this while it was on my dressform allowed me to strategically place them where they would best accent the folds and curves of the piece.

I chose to go with ivory organza and off white appliques.  It truly looked gorgeous with Alex's gown.  Depending on how the light hit the sequins, they could look ivory or off white.  I would say they were more of an opal color, so everything blended together beautifully.......

There was a lot of handstitching involved with the appliques and I also tacked some of the folds of the skirt per Alex's request so that her gown was pretty well camoflauged underneath the skirt.

I have to say, I am thrilled with how this turned out!  I often tell people that the art of garment creation can sometimes require some engineering.  One that doesn't take as much math skill, thank goodness!, but it's an engineering feat none-the-less to get to the end result.

and....for me, there's nothing more rewarding than "nailing" a design....which in the end makes for a very happy bride.  And Alex......she melted my heart.....the first time she tried it on she got misty eyed and asked if she could give me a hug.   Whoa!   That's the best feeling ever!!

Some of you know I have my "wall of fame" in my studio.  Canvases of some of my favorite gowns that I've designed and created over the years.   Unfortunately, I don't have the room to put them all up....but this one will definitely be added.

Here's one more look at this beautiful bride........I'll have tons more pictures, but since I've been dying to share this with you.....I had to snag just a couple from the photographer's "sneak peek" collection. 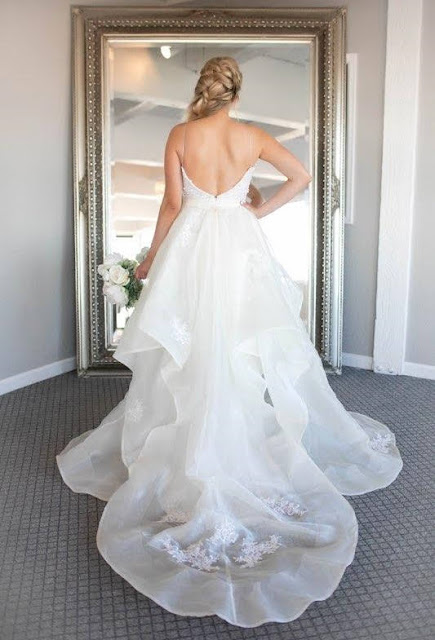 Congratulations Alex and Kevin.  Cheers to a strong, happy and healthy marriage!
Posted by Chris at 8:03 AM No comments: