I have a number of different blueberry recipes on this blog, and they're all yummy in their own right.  This one ranks near the top due to the intense blueberry flavor, and how quickly you can pull it all together. 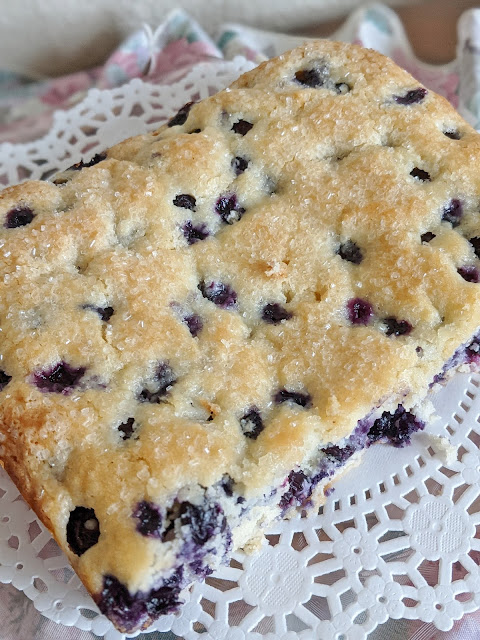 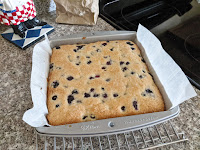 Preheat oven to 350 degrees.  Using a stand mixer or hand-held mixer, cream the butter with the lemon zest along with the 1 cup (minus the 1 Tbsp. of sugar) until light and fluffy.
Add the egg and vanuilla and beat until combined.  Meanwhile, toss the blueberries with ¼ cup flour, then whisk together the remaining flour, baking powder and salt. 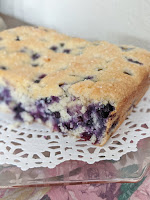 Add half the flour mixture to the batter, and stir with spatula to incorporate.  Add all of the buttermilk.  Stir.  Add remaining flour, and stir until flour is absorbed.  Fold in the blueberries ( leave excess flour from the blueberry bowl behind).
Spray a 8 or 9 inch square baking pan with non-stick spray.  Cut a parchment paper sling and press down into the sprayed pan.  Spread the batter into the pan.  Sprinkle the batter with the remaining sugar.  Bake for 35-45 minutes.  A 9-inch pan should be done closer to 35 minutes, an 8-inch pan usually needs 40-45 minutes.  Check with a toothpick for doneness.   Let cool for at least 15 minutes before serving.
*NOTE:  I had decorative sugar crystals in my pantry, so I opted to use those on the top of my cake versus the granulated sugar.  Also living in high altitude I always use King Arthur's Hungarian flour in my baking.....this recipe as is, works great....no adjustments needed.
Enjoy!
recipe c/o:  www.alexandracooks.com
Posted by Chris at 10:30 AM No comments:

Back in 2018, we began an effort to remove some of our lawn and do some serious xeriscaping.  What prompted the project was a couple of things.....first, since moving into our house in 2015, we began to see many issues develop due to the poor job the landscapers had done in putting in our yard.  I won't go into all the nasty details, but year over year more and more issues were uncovered.  Clearly, any prep they had done to the soil, as well as any topsoil they may have added seemed to be minimal if any.  This was causing us huge issues with large brown spots and the use of lots of water to try to keep a green lawn.  Neither of which were acceptable.  Secondly, we really just had way too much lawn, especially in the backyard.  With only the two of us, there was no need and our water bill was was too high!  Third, for those of us who have lived in Colorado for a long time, the summers are getting hotter and hotter and drier and drier, so it was evident this was only going to get worse.

Step 1.....remove the lawn nearest the patio and add in lots of rock, ornamental grasses and drought resistant plants.  This particular area was downright stupid due to the serious incline.  So trying to mow it was a joke.  Being that this was such a huge undertaking, we contracted someone to help us out.  Below was the finished project as of 2018. 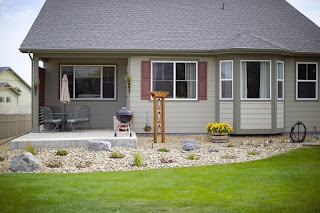 Step 2.....I decided my vision for this area was really more of a "dry river bed" and this wasn't quite what I had in mind.  So, in the fall of 2020, I took to adding additional edging and moved a whole lot of rock out while also adding in some mulch to sculpt it into something more appealing.  It's fun seeing how much the plants grew in just two years time! 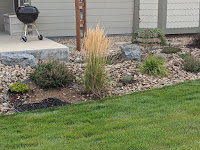 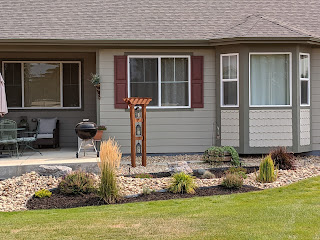 Step 3....eliminate the large section of grass between our two maples that looks just awful.  Every summer by about late July this section is totally brown.  It was such an eyesore.  So, why not xeriscape another chunk and add in another garden to enjoy?  Below is a picture of that area of the lawn that we just couldn't keep green.  Last fall, we removed a large circle of lawn knowing that we'd tackle it come this spring.  Over the last couple weeks, I got her finished.    The pictures show the progress along the way. 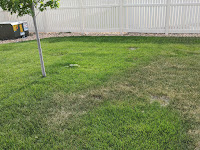 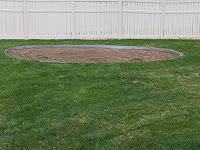 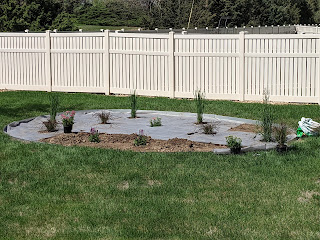 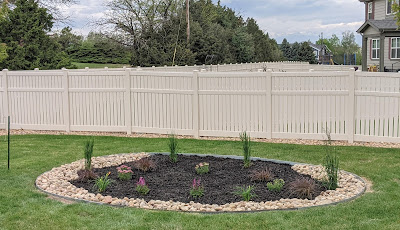 Now just like with Step 1, the plants look a little scrawny, but give it just a couple years and this should look fantastic!  The feather reed grasses will be about 3x their current size, and the other perennials will have also filled out.  The perimeter rock is "recycled", meaning it was what I had removed from the other section last fall when I added in the mulch areas.  I'd like to add in some boulders (not quite as big as those in the upper garden) and we also want to add in plenty of bulbs this fall for some spring color.   Will there be a Step 4?  Who knows.
Posted by Chris at 4:26 PM No comments:

I love when a bride contacts me through my Etsy shop requesting a special order.  In this case, I had a bride who loved one of my waltz length veils, but needed some customization.  First, she needed it in ivory, and secondly she wondered how the lace appliques would work with her gown.

She sent me a couple pictures of her gown which is a strapless lace overlay with a fit and flare silhouette.  I knew I could find a better match to her gown, so I suggested she let me source some lace appliques with a motif that better matched her gown's motif. 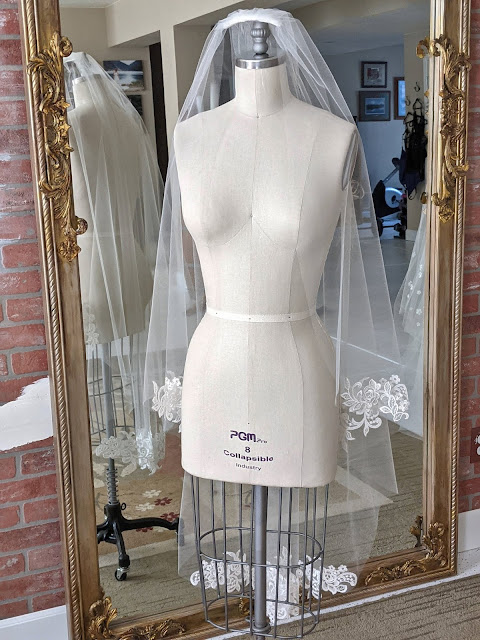 I found a great match for her gown that has large swirls, as well as some florals and leaves similar to those on the gown itself. 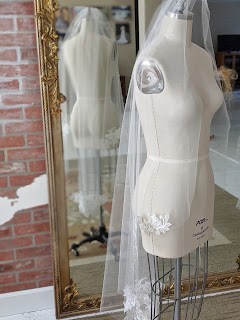 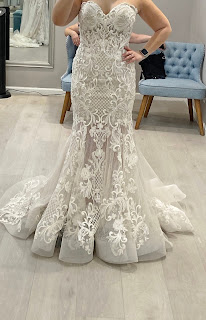 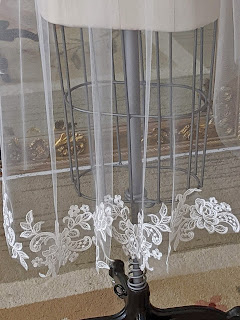 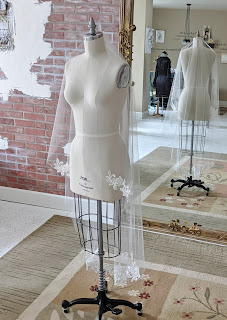 The first set of appliques begins just below the waist, leaving just the plain cut edge tulle to show off her neckline and shoulders. The set at the center back will hit at about her calf, which has less lace.
I'm so pleased with how this came together.  The veil truly looks like it was made for the gown!  I can't wait to get pictures from the bride on her big day!
Posted by Chris at 2:35 PM No comments: 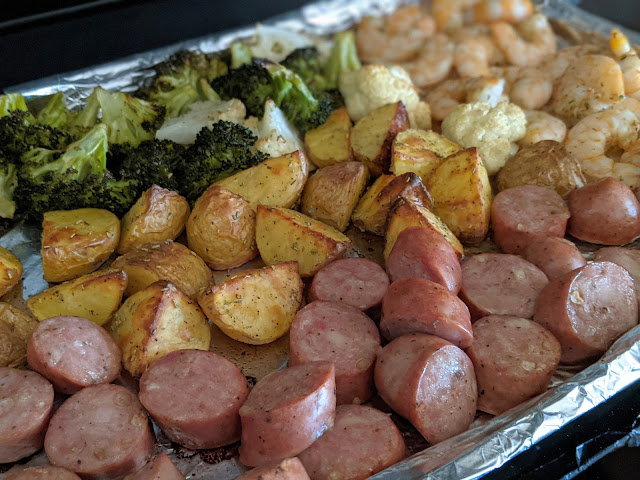