I decided to try my luck at decorating a glass vase.  Funny thing was I had given a bunch of these to the local thrift store, so I didn't have one on hand that I wanted to experiment on.....I probably bought back my own vase from the store!  But hey...it was only .49¢ so I don't feel too bad.
Other than the vase...the supplies you need are: 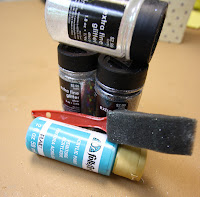 To start, I coated the outside of the vase with Mod Podge.  I then sprinkled on a base of the lightest of the three glitter colors (I was trying for an ombre theme).  Then I began using all three of the glitter colors to create the abstract design on the outside.  Stroke on the Mod Podge and sprinkle the glitter on top, stroke and glitter, and so on....

As for the inside, I used  teal paint.   The cool thing is you just squirt it into the vase and swirl it around a bit...then I used a sponge brush to help coat the sides.  I saw a couple posts about thinning the paint and/or coating the inside of the vase to help the paint glide a bit better...I'll have to try that next time.  I sprinkled a little glitter onto the paint right near the top of the vase for added ooommphhh (yes, that is a word).

The final step was to coat the entire outside of the vase and the inner rim with Mod Podge to seal/protect the glitter.  Easy... Schmeazy and super fast!    I really like the way the teal inside creates a nice undertone that you can see fom the outside.

I plan to try another with just paint....it's a bit counterintuitive to me to paint the inside versus the outside, but it's faster and less forgiving to do it that way; good to know.  I've also read that if you wanted to use this as an actual vase, you probably want to place a plastic inner sleeve/cup into the vase to hold the water....or, just use it for a decorative piece instead.

Do I see some gift giving ideas in your future??? That's what I plan to do with mine.   So go on-channel your inner VanGogh and have fun!
Posted by Chris at 3:11 PM