One of the special wedding projects I was asked to help with this year, included making tulle skirts for three bridesmaids.  This was an outdoor rustic wedding, which included blue jeans, boots and some fun skirts for the girls! 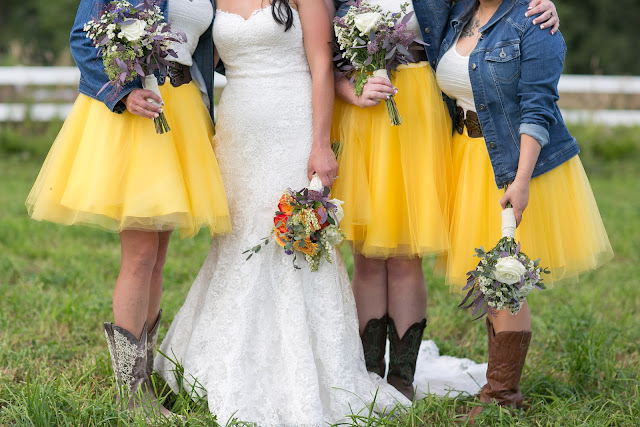 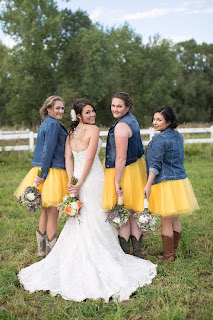 I chose to make circle skirts to limit the gathers at the waist. There aren't many gals who like a lot of extra fullness at their waistline, so by creating a circle pattern it makes for some fun fullness at the hemline, with a much smoother waistline.

This bride definitely had a vision for her girls, including the boots, denim jackets and wide leather belts.  Such a fun pop of color for the day!

Kaitlyn also asked me to make a couple of other items for her big day.  One was a hairpiece, the other a garter.

The hairpiece I made with layers of off-white fabric and a hint of the purple to match the purple flowers in the bouquets.  I topped it off with a bit of lace, russian netting and a pretty rhinestone button for the center. 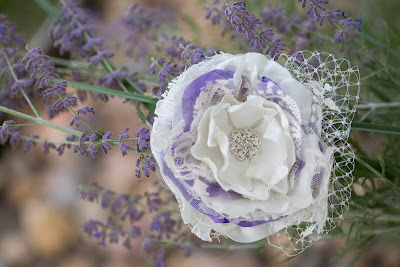 The garter was really special since she wanted to incorporate a piece of her Mom's gown.  I chose to use a lace medallion from the bodice and we also added a bow for her "something blue".  Kaitlyn also asked me to make a second one, not because they were having a garter toss, but she wanted to gift it to her single sister as a surprise.  Isn't that sweet? I understand tears flowed when she gave it to her! 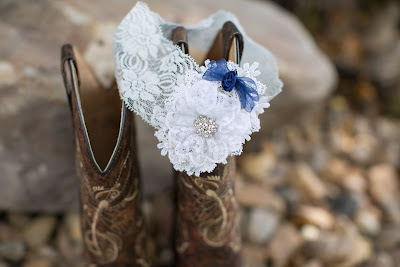 It turned out to be a wonderful wedding.  It took place at a private residence with nine acres of open space for hosting a beautiful ceremony and plenty of options for photos that would match the rustic theme.

The reception was a BBQ, followed by lots of dancing underneath a mason jar chandelier.

Thanks Kaitlyn for letting me be a part of your big day.   Best Wishes and much happiness to you and Justin!
Posted by Chris at 9:47 AM