I stumbled on this recipe awhile back and was waiting for the right oppportunity to make it.  Last night was that opportunity.

This recipe comes from America's Test Kitchen, so it calls for a homemade crust, which I did.  I will tell you, next time I think I'll go with a sheet of puff pastry (like some of the other recipes I found that are very similar).  It's such a timesaver!    As far as flavor though....so good!!! 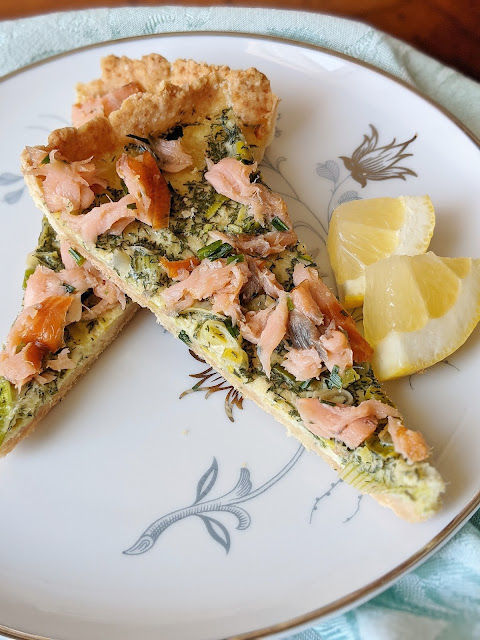 I'm kicking myself for not getting a picture of the tart before I sliced into it.  It was so pretty!  I served it as an appetizer, along with a meat and cheese tray.  Don't forget to add that spritz of lemon before biting into it.

Preheat oven to 350 degrees.  Thaw puff pastry. Roll out to a 12 inch square on a lightly floured surface.  *Line the 9" pastry shell (with removable bottom) with the dough.  Cut off any excess at edge.  With a fork, pierce the bottom all over.  Freeze for 5 minutes.  Cover pastry with aluminum foil; fill with dried beans or pie weights.  Bake 15 minutes.  Remove weights and bake another 15 minutes until golden.
Let stand at room temperature.
Melt butter in a skillet.  Add leeks and 1/2 tsp salt and cook, covered over medium heat, stirring occasionally, until leeks are softened.  About 10 minutes.  Remove pan from heat and let leeks cool uncovered for 5 minutes.
Whisk eggs, half and half, dill and 1/4 tsp. pepper together in bowl.  Stir in leeks until incorporated.  Placed cooled tart shell on rimmed baking sheet.  Carefully pour egg mixture into cooled shell and bake until filling has set and center feels firm to the touch.  Approximately 20-25 minutes.    Transfer to wire rack and let tart cool completely, at least 2 hours.
Just before serving, toss salmon, oil, and chives together in a bowl and season with salt and pepper to taste before sprinkling evenly over cooled tart.  Slice and serve.   You can serve it warm, room temp, or chilled.
*NOTE:  I totally missed the size of the tart pan!  Mine is an 11 inch.  Next time, I plan to double the eggs/half and half so I have more filling.
Enjoy!
Posted by Chris at 11:16 AM