We've slowly but surely been working on updating the kitchen.  We've been in our house for 17 years and it's time.  Last year we did the counter tops after the original builder basics were so worn that I couldn't even keep them clean and the formica was beginning to pull away.


Last week my new dishwasher was delivered.  Woo Hoo!!!  Stainless steel.  I had to stand there and make sure it was running during the inaugural wash.  It was so quiet.  Ours got to the point that we had to turn it on just before the last person went to bed, because it was so loud.   The day after Thanksgiving the new DOUBLE oven was delivered.  Can I get a halleluiah??!!!, and with the glass cook top, no more burner bibs and crusties to clean up.    I have to say, though we were very fortunate.  Both the dishwasher and the oven were the originals, so we got plenty of use out of them.   But, now my kitchen is looking like a 21st century kitchen.  I love it!    The big project was the back splash tile.  I had tiled the walls of the kitchen last year with a mosaic tile, leaving the original green back splash in tact.  But, I really wanted it to go.  It was out dated; I don't even remember when exactly I put up the green backsplash.  This was going to be a biggie though; removing the tile and replacing it. 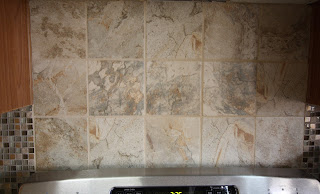 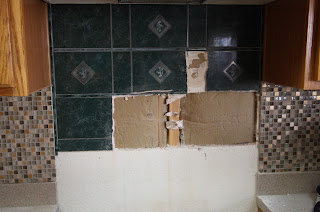 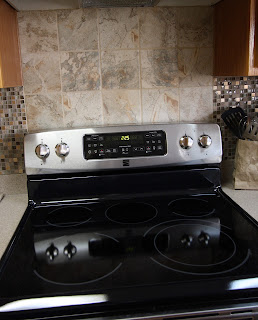 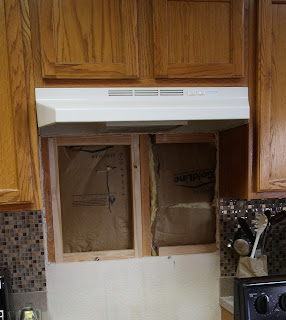 As you can imagine, my husband was not too thrilled with the prospect of this project.    After doing some research on the internet, it appeared there wasn't going to be anything easy about it.....but, many people have successfully worked through something very similar.  So, away we went.   Step one was to remove the old tile.  Per the advice from the associate at Home Depot, if my husband had a dremel tool he could use that to remove the grout and then pry the tile free.  Well, I must have done an awesome job putting up that backsplash, because that didn't work quite like he described.  Bottom line, after consulting with his brother who is in the construction business, he literally remove the entire drywall, tile and all.   That meant he needed to build new framework and replace the drywall before I could get started on the replacement tile.  I think his words to me at that point were, " promise me, no more tile projects."  So far, I've used the cook top, but I haven't used the ovens yet.  Christmas cookie season is fast approaching.  Two ovens should make a huge difference!
Posted by Chris at 6:02 PM