I created this sign with a one year old ring bearer in mind.  I knew it would be helpful if I could make his role in the wedding as easy as possible; after all he needed to concentrate on the new art of walking that he had recently learned!

Knowing that the bride was looking for a rustic sign to blend with the theme of the wedding, I found a scrap piece of wood in the garage and cut it down to a manageable size for a one year old (well actually, I let my husband help with that part).   I also made the sign "hands free" by creating a twine hanger that would allow him to wear it around his neck while he walked. 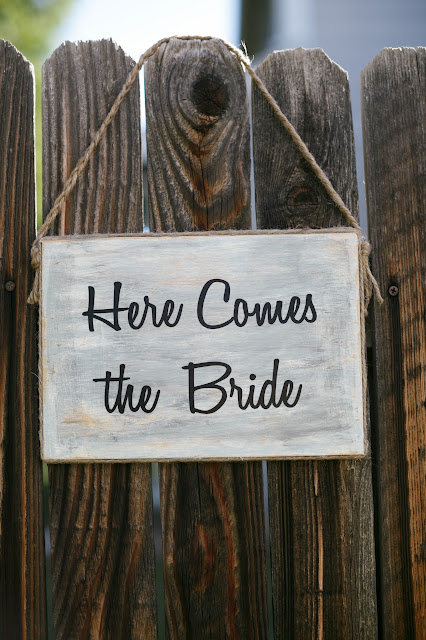 The bride knew that she wanted "Here Comes the Bride" on the sign, I suggested we add another look to the reverse side.   I could create an "established" sign for them with their surname. 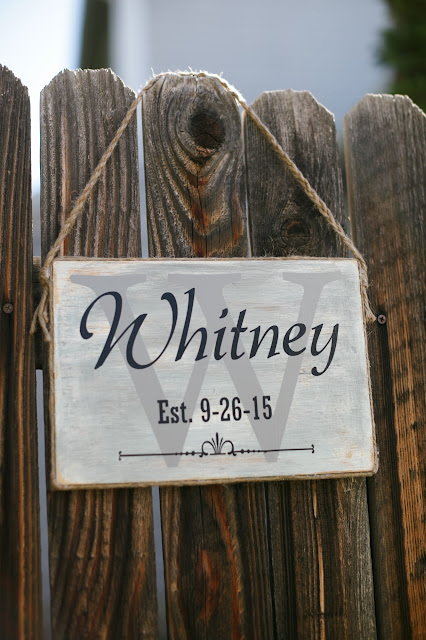 I suggested the sign could be flipped around on the ring bearer (for the recessional), then after the ceremony. it could be used at the reception (on the gift table, the head table or the guest book table) and finally after the wedding, they could use it for decoration in their new home.  So instead of using it only once, they could enjoy it for years to come!

I painted a white base coat on both sides of the sign, then added a top coat of a blue grey over that. To give it a distressed look, I sanded to remove some of the paint.  The lettering was done on my silhouette machine using black and grey vinyl. 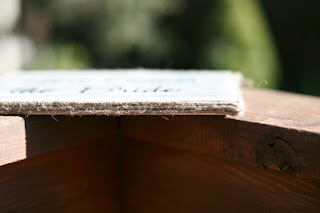 Once the lettering was in place, I gave it a good coat of Mod Podge to seal and protect the surface.  For the edges, I used a narrow jute twine; wrapping it around three times.

I had hoped to be able to share pictures of the little ring bearer with his sign, but it didn't work out quite as planned.  Instead he was carried some of the way by his Momma, and when he decided to walk, he was holding the sign by the string and being so low to the ground it was tough to read the sign.  Oh well.....it was placed on the gift table after the ceremony and looked great among the gifts.
Posted by Chris at 7:24 AM