What a fun project.  My daughter needed doors to separate her laundry room from her studio in her basement.  My husband finished the studio portion of the basement for her, and left a larger than normal opening for the doorway in the event they ever needed to swap out the washer or dryer.  So she needed something "unique", not only due to the size of the opening, but also since it would be on the studio side of the basement and she had worked really hard creating the look that she wanted for that area.

My mind went to "old" doors, we also talked about a barn door.....I had shopped a local surplus store a while back and was enamored with the types of home improvement items you could find there.  Bud's Warehouse, carries all sorts of new and donated home improvement items at very reasonable prices.   I had found brand new cabinet doors there some time ago, and remembered they had lots of doors too. 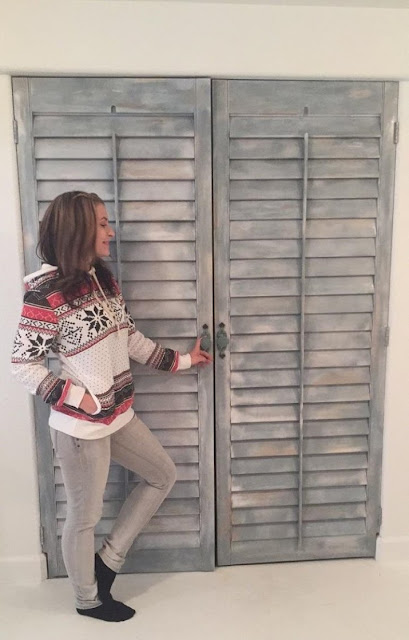 After wandering around, there were some shutters that caught my eye.   It turns out multiple sizes of the same shutters were donated by a gentleman who removed them from his home.  A set of two of the large size would fit almost perfectly in the opening and would be a fun alternative to a run of the mill door!    At only $15 each, it was a steal of a deal.   A couple cans of spray paint and they'd look SWEET! 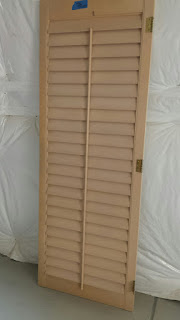 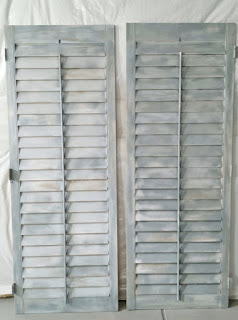 The shutters were a tan/beige color and we thought they would look nice as a distressed bluish/grey.   I had distressed an old dresser and nightstand for her a couple years ago that she uses in the studio and we wanted the shutters to compliment those two pieces. 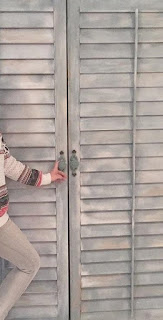 Because my basement is yet to be finished, I set up a couple of saw horses and some plastic sheeting and went to town.  I first spray painted a base layer of white on the doors, followed by some grey.  After that, I propped them up against a wall and started "whitewashing" some white and brown areas for a more weathered look. Standing them side-by-side, I could ensure they looked like a matched set.

Oh my gosh!  They look so good in her studio.  She had purchased a couple of vintage looking door knobs on sale at Hobby Lobby (of course, I've taught her to use the weekly 40% off coupon whenever possible) in her logo color of teal as the finishing touch.   So for just under $50 she has a totally unique and functional set of doors for her studio.....even better, she has used them as a backdrop already too, and they look great in pics!  Love it!!