I was first introduced to these hors d'oeurves a few weeks ago at a wedding.  They were tucked away on a table with a few other appetizers that were served during cocktail hour.  Later that evening I asked the coordinator what they were and was shocked when she told me it was a date stuffed with goat cheese wrapped in bacon.  They were absolutely delicious!  I had never tasted anything like it.   A few days later I started looking for recipes, not thinking I would find anything, but to my surprise there were several out there. 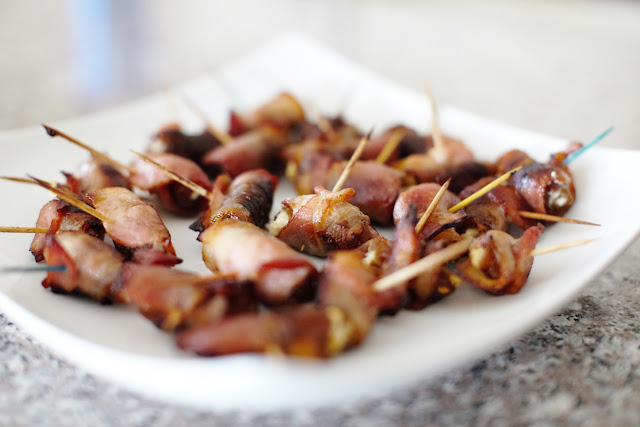 Since that time, I've made them twice.  Once for a dinner party and the other for Super Bowl Sunday. I learned after the first time to cook them a bit longer, and stuff them a bit fuller and they were fabulous.  In fact, they're downright addictive!  What's even better....you can make them ahead of time and then pop them in the oven about 20 minutes before you're ready to serve them.

24 Pitted Dates
8 strips thick bacon ( I used a variety that had a maple flavoring)
4 oz. goat cheese (you'll have a bit leftover)

Cut a strip of bacon in thirds.  Slice the date lengthwise.  Add a small dollop of cheese to the date; close tightly and wrap with bacon securing with a wooden toothpick.

Serve hot out of the oven.