I've been so anxious to share this.....it was an ambitious project with lots of steps along the way, but the finished product is so awesome, it was so worth all the elbow grease and muscle used in the process. 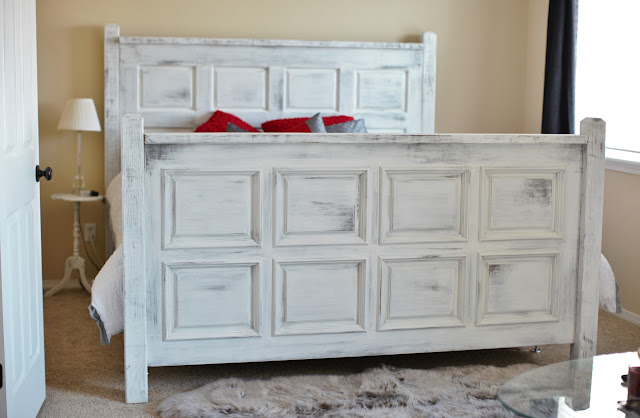 This project was a labor of love for our daughter.  She needed a bedframe and spotted something at American Furniture Warehouse, but the sucker was so huge there was no way it would fit up her stairs.  So, of course, I said "we can make something like that for you".   It was a rustic piece, so I knew I had distressing mastered after working on multiple projects.  And.....I felt by using old doors we could create something similar at a fraction of the cost.  Oh....and it would fit up the stairs! 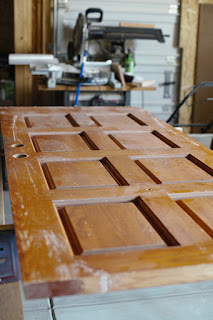 So, first stop was ReSource in Boulder a great place to pick up reclaimed building materials.  My daughter and I took a "field trip" and as luck would have it, we found two matching doors.   Perfect!  Since we knew she wanted both a headboard and footboard.  We tagged them and two days later my husband and I picked them up with his truck.  Now, I have to tell you, these suckers were/are beyond heavy.  They are solid wood exterior doors.

The next step was all me......sanding, and sanding, and sanding.  The doors were really worn with all sorts of gunk on them, including bird droppings.  Worn was not a problem, it went right along with the rustic theme, but the dirt and grime would have to go! 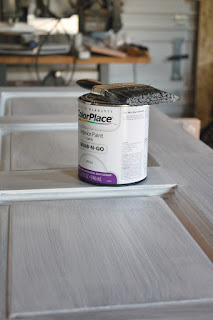 There were several steps along the way when I had to recruit my husband due to his mad carpentry skills.  The next step was one of those times.  The width from the panels to the top of the door was narrower than the width on the bottom of the door. So, my OCD kicked in and I said the panels really needed to be centered. Keeping in mind the width of the bed, the bottom of each door was trimmed accordingly. (I made that sound really simple right?)

Next up, painting.   I first went with the grey that my daughter had picked out.  After the two coats of grey had dried, a "whitewash" of white paint was applied.   As you can imagine, this took time.  Although, I have to see the 90 degree weather made for an accelerated drying time. 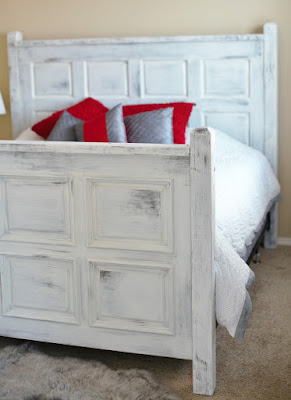 After both sides of a door was painted in both colors.  The distressing began.  So, back to sanding to allow for the grey to peek through and create a weathered look.   There's no science to this, I just know it when I see it.   After I had finished both doors....it was back to my husband.  We purchased 4x4 posts and a couple of 2x4's.  He rocked it when it came to creating my vision for the posts and the "ledges" for the tops of the doors.  He was even able to put a finishing edge on the posts that was just what they needed. 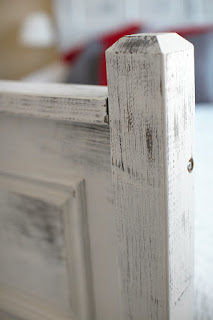 Next up,  a couple days worth of  painting and distressing the posts and 2x4's.     Okay.....so now, we need to transport these to our daughter's house.  My husband figured it would be easier to transport to her house and up her stairs, unassembled.  So that's what we did.  We delivered them to her garage. Headboard and Footboard separate from the posts.

Then, it was up to her to find some burly guys to help her get the doors up the stairs.  Did I mention how heavy these suckers were?  Yeah.....so, that's why we bailed.  Getting them on/off saw horses and in/out of the truck is one thing.  But carrying them up stairs.  No thank you.

Once they were muscled upstairs, my husband and daughter put everything together.

She is absolutely ecstatic!  That in and of itself makes all the work worth it.   But still, I have to say I'm really proud of the finished product.  This truly was a "his, hers and ours" project from start to finish! 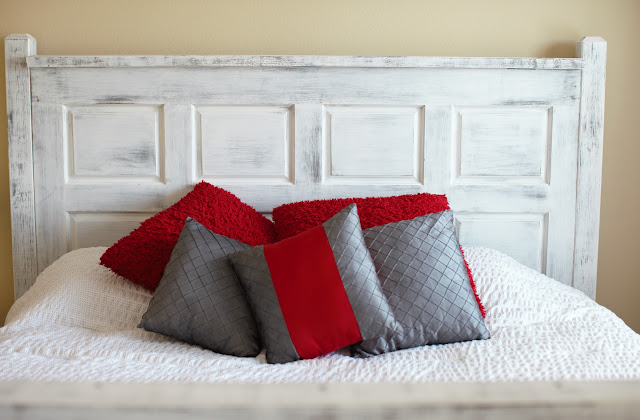 In case you're wondering, the bedframe at AFW was $555, this came in at just under $150! (that includes the metal bedframe the box springs and mattress sit on)  The bedroom is starting to come together.

I also distressed the table next to the bed to match the bedframe.  It had been painted over the years to a dark brown.  I used the same process for distressing as I did the bed.

The color theme in the bedroom is red, grey and black.  A few accessories here and there, maybe a few touches for the walls and it will look fantastic!
Posted by Chris at 4:30 PM