It's always an extra special project for me when I'm making a wedding gown for a family member.  In this case, it was my nephew's bride.  She wanted a long sleeve off-the-shoulder gown.   The bodice was made of lace and the form fitted skirt was a net overlay with a crepe underlay; the drape of the skirt was absolutely beautiful. 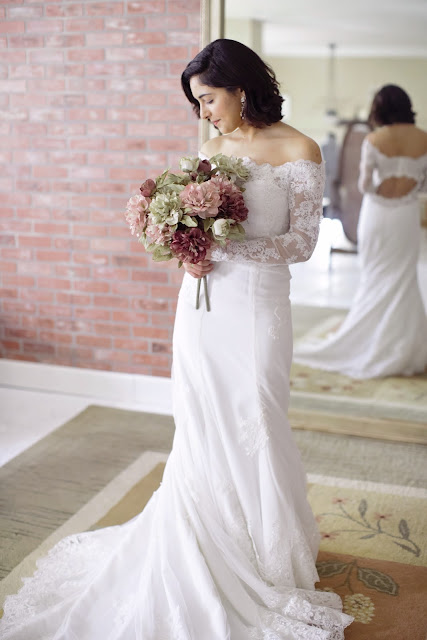 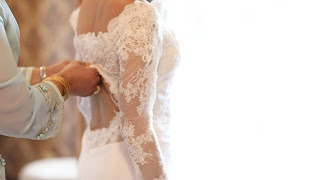 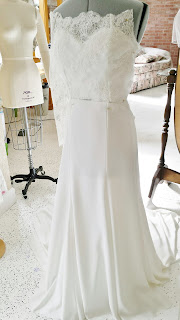 I first began the project back in September of 2017 (for an April 29th wedding date), once we finalized the design and I took her measurements I was off to the races finding all of the fabrics and trims I would need.  Some I found locally, others I found online. 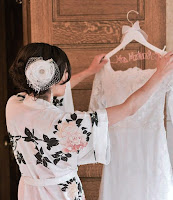 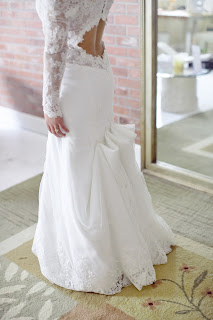 Because of the off-the-shoulder design and the keyhole back, fitting the bodice was the biggest challenge.   But with a few extra fittings, and some extra effort, (one of which was adding a silicone strip to the top of the bodice to keep it from slipping; the same strip you find on a strapless bra) it ended up fitting really well!

I like to spend time on the bustle of my gowns.  Since so much of the day, the gown is spent in the "bustled" position,  I try to make it extra special.  Because of the shape of Aisha's train (long and narrow), I was able to come up with a really lovely bustle design that looked so pretty during the dances!

I also made Aisha's birdcage veil and garter.  I made the veil so the "blusher" could be tucked behind the flower (after the ceremony) allowing her to wear it the entire evening.

On her garter, I used feathers, to match those in her veil and added a touch of "someting blue" with some beading.

The wedding palette of the day was various shades of purple; the bouquets and centerpieces were so pretty, and the bridesmaids chose their own style of gowns.  In April, the unpredictable Colorado weather was the only potential concern, but as luck would have it, the wedding day was a dry and balmy 80 degrees!

What an honor it was to be a part of this special day for my nephew and his bride.  I wish you both a lifetime of happiness!
Posted by Chris at 3:34 PM