This year's Mother/Daughter vacation was truly a dream come true.  I've wanted to visit Venice for a long time and the Loire valley in France turned out to be equally as magical.  Since there is so much to share, I decided to break this post into two parts.  First up, Venice. 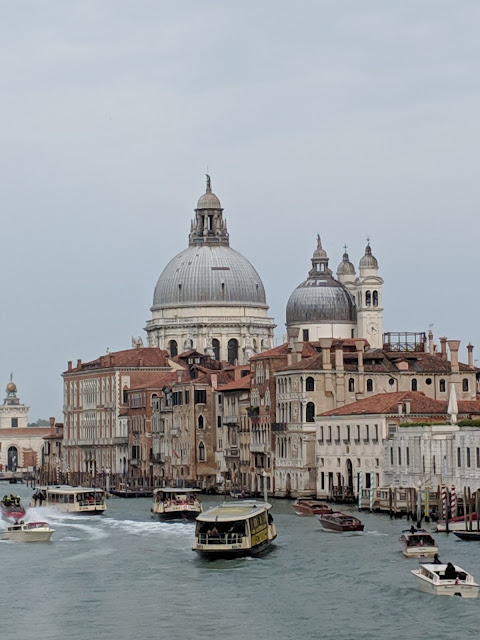 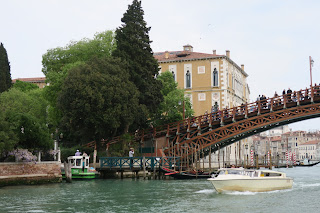 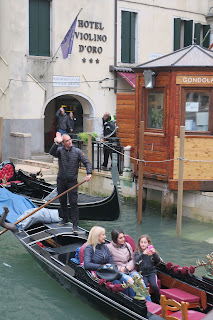 We flew into Marco Polo airport (via Frankfurt) and took the express bus into the Piazzale Roma which is the main transportation hub for the city.  From there, we hopped on one of the water taxis to our hotel.   Finding the right transportation into Venice took a lot of research.  But, I'm happy with the choice that I made.  I purchased the bus tickets right from a machine in the airport and we were at the Piazzale Roma in just about 30 minutes.  From there it was about another 30 minutes to our hotel......but, what a 30 minutes it was!  The Grand Canal was amazing! 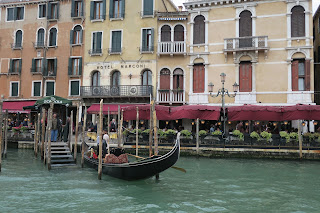 The hotel I selected (Hotel Violino D'Oro) worked out well.  It had a complimentary breakfast included and was within ten minutes of St. Mark's square.  We were furthest away from the Rialto bridge, but we found that area to be the most congested so it all worked out great.     We'd start the day early, with full bellies from breakfast and go all day long.   As always, I had a planned itinerary for each day, with some wiggle room if needed.   I had one organized tour planned (a visit to the Doge's Palace and Secret Itineraries), but the rest was "self-guided". 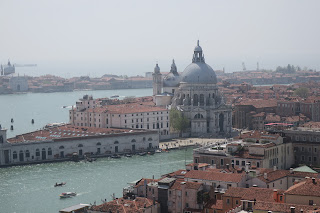 We purchased full day water taxi tickets another day (the most economical) to expolore two of the many surrounding islands.  We went to Murano, which is known for it's glass making and Burano for it's lace making.    Both were very unique.  My daughter and I favored Burano....it's so colorful!  Another "must see" for me back in Venice was St. Mark's Basilica and the Campanile.  I really enjoyed going up in the Campanile.  The views were amazing! I highly advise purchasing the tickets online so you can "skip the line".   Not only did we not waste time standing in line, but it allowed us to plan the rest of our day, knowing when we needed to be back for our reserved time. 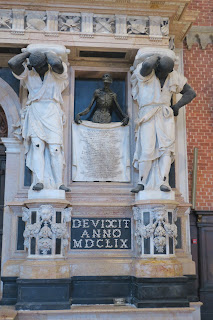 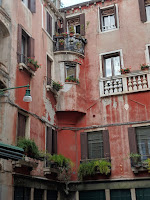 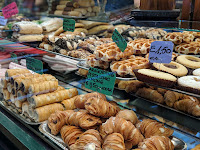 We walked on average seven miles each day.  Walking is truly the best way to see the city!  There was one other water taxi ticket we purchased since there was a church I really wanted to see (Basilica dei Frari or Santa Maria Gloriosa dei Frari) on the other side of the canal and we had been walking in circles (BTW...google maps is not the best way to navigate, it gets very confused with all the water).   We also did what many guide books and blogs recommend and that's to get lost.  It truly was fun, and we were able to find our way home each time.  We also found some great hidden gelato shops off the beaten path! 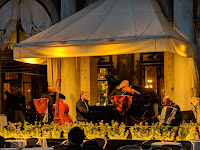 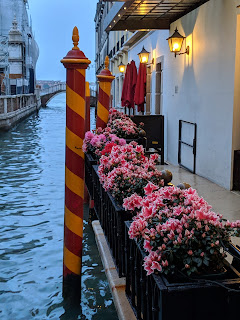 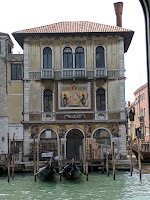 I guess my best advice is to be prepared for crowds.  And, in a city with as much water as it has, and tiny little streets, alleyways, and bridges, it's crazy!  Especially when people want to stop for selfies on the bridges.  We've been really lucky avoiding the peak travel season by traveling in April/May each year.  I thought by traveling right after Easter we'd miss the crowds.  Not true.  It was crazy.  And, we ran into a celebration which I wasn't aware of on April 25th.  Liberation Day.  A holiday commemorating the end of Nazi occupation during WWII.

It's similar to our Independence Day with lots of pomp and branches of the military in St. Mark's square.  It was fun seeing it....but it obviously brought in the crowds too.
My second piece of advice is to start early.  The large groups didn't seem to make their way out until about 10:30ish.   Getting up as early as we did, we took advantage of the quiet streets early in the mornings.

We spent 3 days and 4 nights in Venice and personally I thought that was the perfect amount of time.  Don't forget to try some cicchetti while you're there.  It's Italy's version of Spain's tapas.  It was perfect for us on a couple of occasions.  Try a glass of wine, a bellini or aperol spritz with it and you're good.

Because we had an early morning flight, I chose to splurge on our departure with a private water taxi to the aiport.  It arrived at a pier literally three minutes from our hotel and took us to the airport.  It was a great way to end our visit!
Posted by Chris at 1:23 PM