After the success I had with my first distressed cabinet, I offered to take a stab at an old dresser and nightstand for my daughter and her fiance'.  We were donating the pieces to them anyway for their new townhome and she was hoping for a distressed look as well.

These circa 1960's bedroom pieces were a part of our guest room when we lived in Seattle, but since moving back to Colorado, they were relegated to the basement.  We were happy to see them put to good use again and I was grateful to have the additional room in my newly claimed sewing/design area.


For this project, I really had to take the power sander to task.  Circa 1960's is heavy on the stain and high gloss finish; it generally also includes laminate as was the case on the top of both of these pieces.  I knew I was looking for just a bit of the dark to show through and really wanted it to have more of a "white washed" look.    So, I again used an "80" as my sandpaper and really went crazy getting the base stain/finish off (without hitting the particle board).   The laminate top was the worst.  It is really difficult to totally remove it, so I did my best to rough it up so that the paint would adhere well.  While I was tempted to totally remove the laminate, it was particle board beneath....yuck!

After I sanded like crazy, I took the hammer to it.  This was actually kind of fun!  I banged it up pretty good creating the dents and dings to distress it appropriately.

Then I used some leftover interior white paint I already had and brushed it all over the pieces.  I let a bit of the original color show through.  When I had finished that, I then added a touch of grey.  I actually watered it down a bit so that it went on super light.  I chose to finish these with a satin spray finish (thank you Dear!), especially since they are going to get daily use.

Finally, I felt the pieces needed pulls...both from a practical standpoint and for the aesthetics.   I decided to use a different type for each of the four drawers on the dresser and went with just one style for the nightstand.  Don't they look cute! 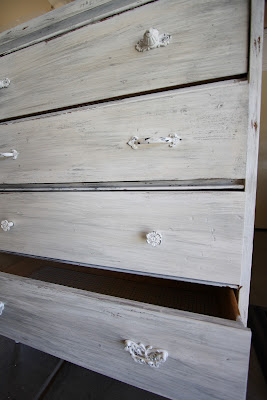 So there you have it.   With any luck these pieces will see another decade or so of use in their new home with their new  owners.
Posted by Chris at 11:12 AM