This project was long overdue.  For years, I had  pleated cellular shades in my living room/dining room.  In the time that I've had them, I've had to replace the cord on the living room shade and totally replace a panel in the bay window dining room since it tore.   Since then I had another panel that the cord was pulling the shade up on one side only and a second panel that tore.  REALLY????  ......and these things aren't cheap!  So, I decided I was done and needed to switch things up a bit.
I apologize for the quality of the pictures.  It was tough to capture this correctly due to all the back lighting. 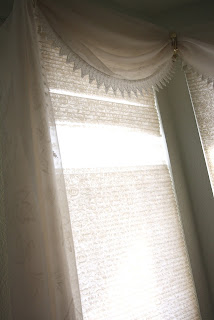 In the picture on the right you can see how the shade tore....what an eyesore!

When I was considering what I wanted to replace the cellulars with I had to consider that it was rare for us to open the two middle sections since it looks right into our neighbor's windows.  If we did open them at all, it was only halfway so that we could pop the window open and get some ventillation.    I knew I wanted some privacy, but I also didn't want to totally darken the room.  So, I opted for sheers; lightweight yet opaque so from the outside you can't see in at all.   Classic, yet fresh! 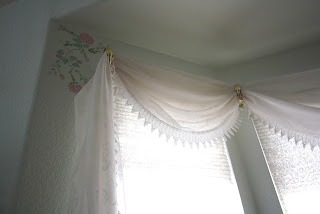 While I was at it....I decided to ditch the brass look of the swag fixtures (oh and the stencilling is going to go in the next couple of weeks).
I had made the scarf valances years ago and still liked them, so I got lucky and found a great color match at a recent sale at JC Penney and bought the sheers.

The living room was a breeze; I bought three panels (50") and the length of 84" worked great.   For the dining room, I bought five panels, but the 84" was going to be too short and the 103" was too long.  So, that was the only drag of the project.  I ended up cutting eleven inches off each panel and then hemmed them by machine.
To change up the brass look....I used a two step antique spray paint; the bottom layer is a matte gold and the top layer is antique white, which crackles as it dries...the more coats you add of the top layer, the deeper the cracks.  It makes the brackets much more subtle. 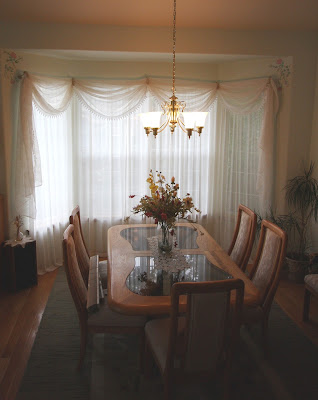 So there you have it....this was step one of  the ongoing transformation I plan  to continue to make in the living room/dining room of our home.
Posted by Chris at 10:17 AM