I wanted to share my technique on this wedding gown bustle, since frankly I was stumped for a bit trying to come up with the solution.  I figure, if I can help someone else after losing some sleep over it....then I should share right? After all, why should we both have insomnia over this?  ;)

When I look at a gown, the type of bustle usually comes to me very easily; meaning under bustle or over bustle.... the gown design itself generally dictates which bustle version it should be based upon the silhouette of the gown and/or the design features on the back of the dress.

A good example, was the gown bustle I did last year that I wrote a blog post about.  This bride's gown had a beautiful beaded border around the bottom of the gown with a delicate ribbon and bow that absolutely needed to be seen when the gown was bustled.  Knowing that, it was simple....it needed an over bustle!

The gown I made my daughter, on the other hand had many design elements higher up on the skirt (1800's style bustle, rose fabric flowers, shirring) that needed to be shown off, so an under bustle was in order.

The last two gowns I've worked on have been lace overlay gowns both of which had very form fitted bodices all the way to the hip; to me the silhouette called for an under bustle.  Show off the beading and lace, and create some design flair at the hemline.  The unique thing about this most recent gown was the embroidered tulle overlay extended a good 10 inches beyond the taffeta gown underneath.  That meant a double under bustle; the first bustle to get the majority of the gown up off the floor, the second to pull the tulle up and show off the embroidered border at the hemline.

I actually, pinned it two different ways at the fitting and let the bride decide which look she preferred.   Once the decision was made, I needed to figure out what I was going to use to hold the second set of bustles securely in place.  The challenge was the tulle was extremely delicate and the embroidery was very subtle.   What could I use that wouldn't be seen through the tulle when the train was extended?  I actually shared that with my bride; I told her "I'll get it done....I'm not sure how yet...but, I'll figure it out"..and we both chuckled. The bride suggested clear snaps, which I've used on gowns before....good thought....my reservations were a) the number of snaps I would need, b) the fact that they are so hard to see/find (I didn't want this to be a chore for the bridesmaids) and c) will they hold? in my experience, sometimes they do and sometimes they don't.  I hadn't ruled them out...but, I decided to walk away and give it some thought.

So, as I was working along, pinning and fluffing, pinning and fluffing....I finally had a revelation! Tulle....use tulle ties!  They'll blend in underneath the tulle overlay, right?  So, I sewed a pair into the gown, one tie sewn to the wrong side of the tulle overlay; the other to the right side of the taffeta gown.  I tied them into place to see if they would do the trick...Yes! and then I extended the train to see if they were hidden...Yes! 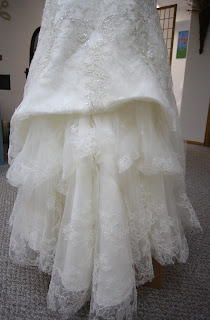 This particular gown has a total of 13 bustle points; it definitely takes the record in my books so far! The upper bustle has three bustle points; one at the center back and another at each princess seam.

Since this bustle carries the majority of the weight I chose to use buttons and loops.  I make my loops with double fold seam binding. I re-fold the binding and sew it by machine to make them extra strong like a belt loop. The loops are sewn to the wrong side of the train and the buttons are sewn to the lining.
Bustling the tulle was the challenge (that's the "G" rated term)!   The tulle overlay was actually a double layer, and was not stitched together at any point below the heavily beaded area which ended at the bottom of the zipper; so the two layers weren't always playing nice together...aarrrgghhh.   Anyway, I got through it, and I think it looked so pretty!   There are 10 bustle points (pairs of ties) to create this look.  I especially like the way the tulle poufs at the top and then falls into folds to the hemline.

To make things a bit easier on the bridesmaids I wanted to somehow offer a "road map" as to which pair of ties went together.  You know;  #1 ties to #1, #2 ties to #2 and so on....  But, you can't successfully write on tulle, and I couldn't color code because of it showing through the tulle.  Hhhmmmmm...what to do?  Again, this solution came to me after a 2.5 mile walk around the lake after dinner one night.....scotch tape.  Secure the tape to the end of the tulle and then use a pencil to write the numbers on the tape! 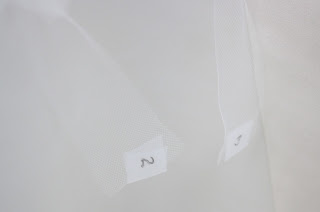 So there you have it.  I apologize for the saga.  I thought it worthy of sharing.  I'm sure there are other solutions, and I may look back and think...why didn't I think of that?, but I'll stand by this one for now.   The tulle ties will definitely withstand a night of dancing and I know the tape will do the trick to at least get the gown bustled; if they come off while the girls are tying them-no worries at that point, they've served their purpose.