I've been thinking about this patio project for several years now.  I finally decided to tackle it this year.  I had finished another landscaping project earlier in the summer and it just seemed like the right timing.  After all, if I finished the patio then I could sit outside and admire the view of all that landscaping work I had done! 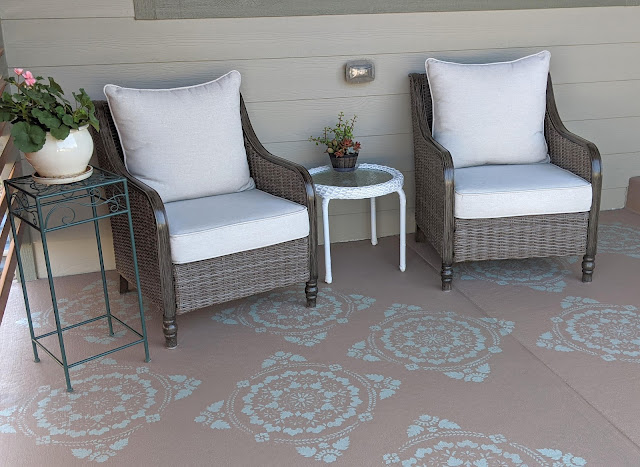 It's different than I had originally envisioned, but it's growing on me.  The colors were a bit of a disappointment.  Our house is two shades of green, so I was hoping for a sage green and tan.  Neither came out like the "brochure", or the paint smear they put on the top of the can after tinting it.....but, it's not horrendous.
It took many days due to the number of steps, and also the weather.  It was super hot, so every day we tackled a step starting early in the morning.  We also had a couple days when rain was possible, so we skipped over those,which obviously meant delays.   The first step was a good power wash!  The second step, filling the expansion joints.  This wasn't a requirement, but I did like the idea of it since I find myself sweeping and/or hosing leaves, bugs  and other things out of those seams regularly. 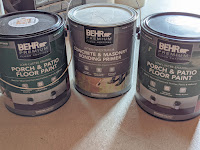 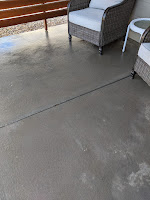 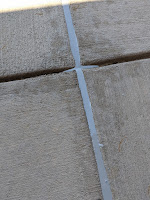 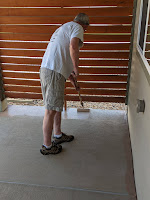 Next up......the primer coat. This is a recommended step by Behr (which is rated as the top brand for Porch & Patio paint). We used this when we painted our basement floor, so my husband was familiar with how it goes down; watery and milky. Once that step was completed and fully dry per the can instructions, the base coat went down.
That was the tan color....my husband described the dried color as a chocolate milkshake, which is a pretty good description.     Now it was my turn......the stencil queen. I have done about 5-6 stencil projects that I can recall. But, I have never done stenciling on concrete.  I didn't really give it much thought.  I did read some other blogs, but everyone had varying techniques....so I just decided to go for it! 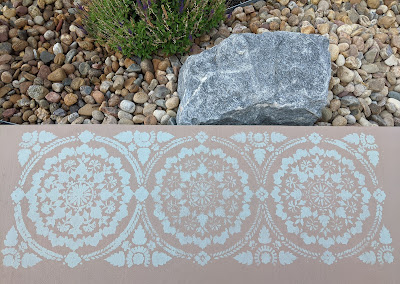 Looking at the picture to the right, you can see differences between the three stencils.  In the first one, I used a firm foam roller.  I've used this tool for many projects.  You can see I have some bleed over, so I thought maybe I didn't "offload" enough paint, or was using too much pressure.  So I used the same roller, adjusting my technique, but still had issues.    In the third one, I decided to switch to a 3/8" roller for rough surfaces.  Voila! 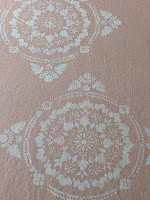 My other decision, however was the pattern.....I was planning to use this interlocking motif, but once I got these three placed and adjoining, I decided it was going to be way too busy for our little patio. So, I opted to turn the stencil 90 degrees, and randomly place diamond versions all over. Again, the paint color is more of a seafoam green, versus the sage color I had hoped for which in honesty is another reason I didn't want to go overboard.
The stenciling took me probably six hours over the course of two days. The first day, I literally painted myself into a corner. The second day, I was able to "fill in" where I wanted to add some additional coverage.  It was tempting to do more to fill in the gaps, but I finally talked myself out of it.

We're slowly getting the furniture back into place after a good cleaning and in some cases a fresh layer of spray paint.  Everything is coming together nicely.  As it turns out, that seafoam green is one of the colors in my chair cushions at the table, so the colors are actually coming together nicely.
All in all, I'm enjoying the new look.  In case you're wondering we did not put a sealer on it.  We did lots of research.  Behr said it wasn't necessary.  My husband read some reviews from people who had used it and they weren't too pleased with the outcome.  It goes on watery and milky like the primer and if you're not careful it leaves streaks.  Based upon those two things I opted to got without.
Hopefully, we've got several weeks left this season that will allow me to sit outside and enjoy all our hard work.  The morning are definitely cooler, but the temp is still soaring by the afternoon.  Bring on the Fall!!!
Posted by Chris at 3:18 PM