This was my brain child, but I couldn't have pulled it off without the help of my husband; he's the woodworking/sanding/drilling expert and this project definitely needed that skill set!

The idea came about close to a year ago and I've been saving up the pieces that are the cornerstone of the design ever since then.  We made it for our son-in-law.....not only does he enjoy wind chimes, but it showcases his company (Vemma) at the same time,  so I knew he would like it. 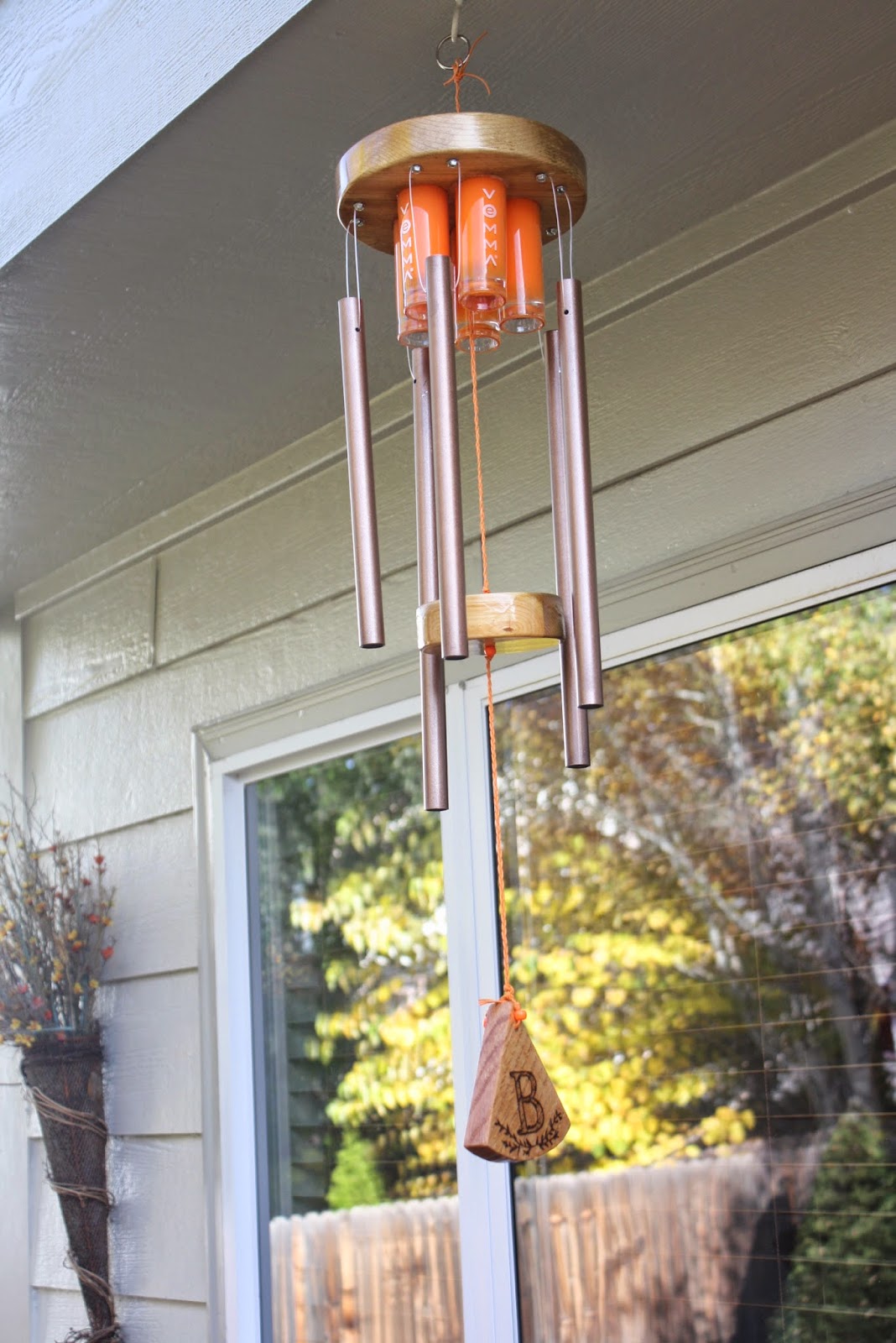 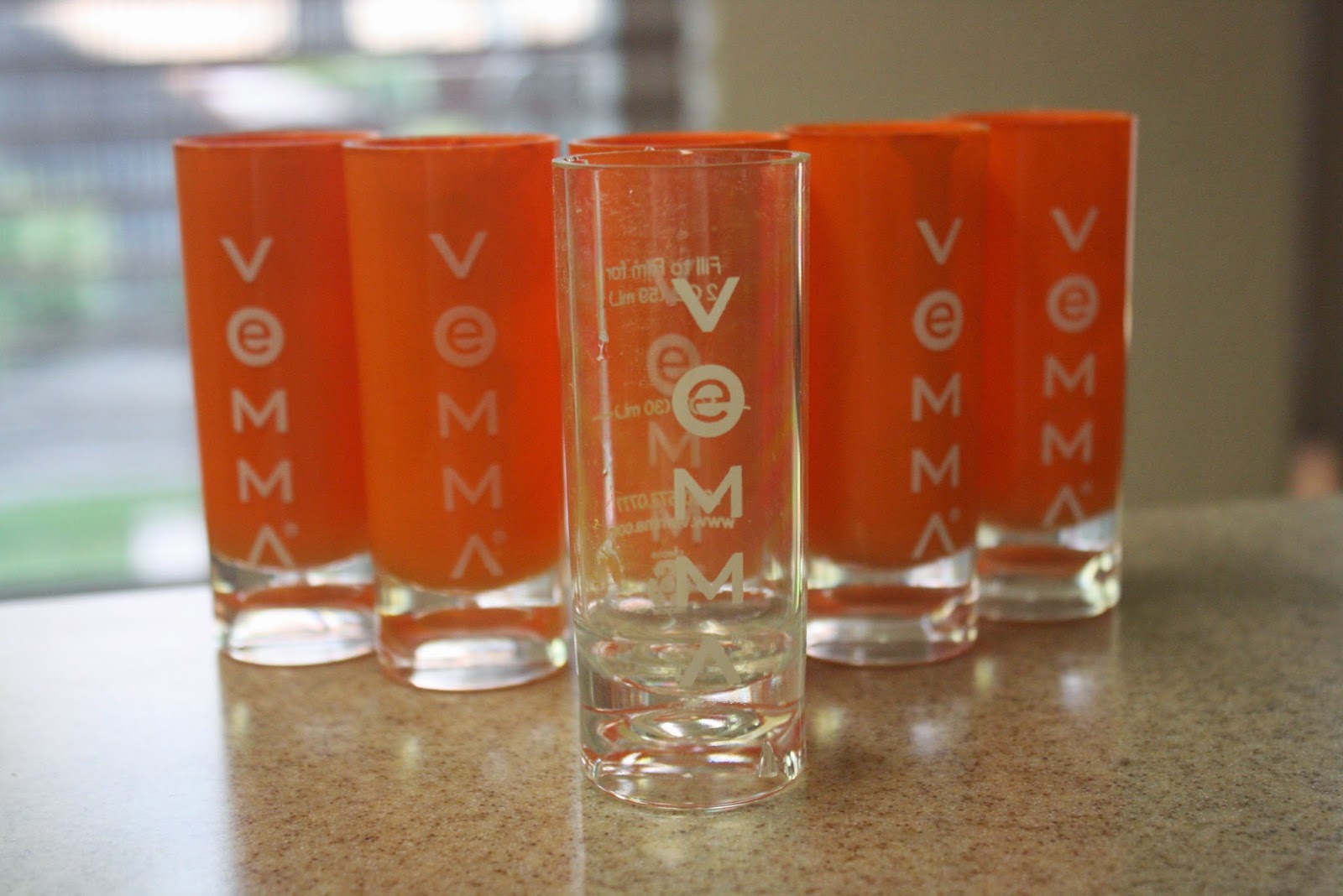 There are a couple of Vemma products that I drink regularly, one is the basic liquid antioxidant that I have every morning; it is loaded with 90+ nutrients.  It comes with a 2 oz. shot glass which is the recommended daily dose.

I decided the shot glasses would make a cool focal point for the wind chime.  They are actually clear, but I knew I wanted them to be the signature color of the company which is orange. So I bought a little container of craft paint and coated the inside of each of them.

A long tube from Home Depot was cut in varying lengths (I definitely did not do that step) for the chimes and then two wooden circles were cut, sanded and stained; one for the base and the other for the striker.  I chose a bronze spray paint color for the tubes; I thought it would look sharp against the wood tones and the orange. 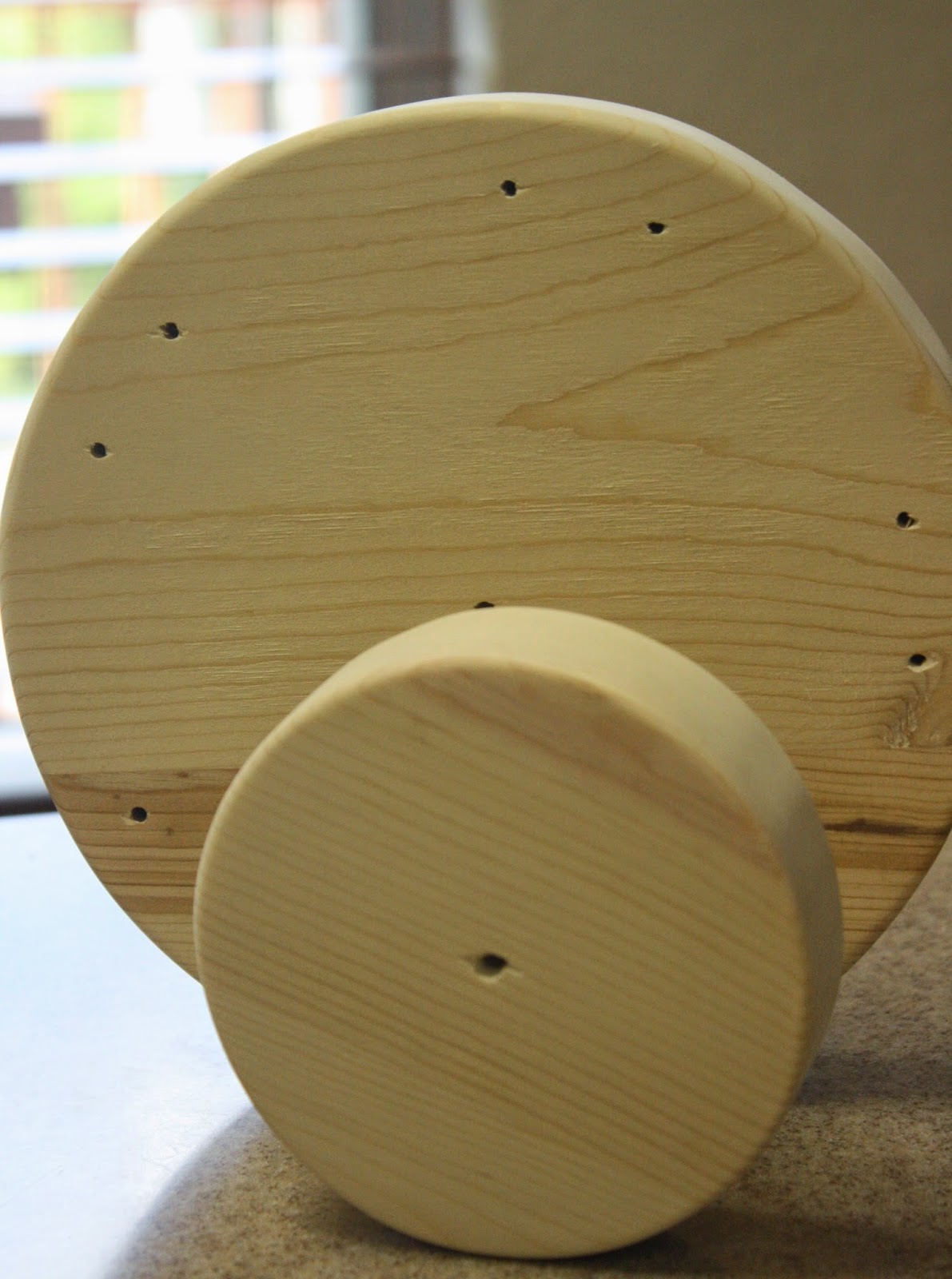 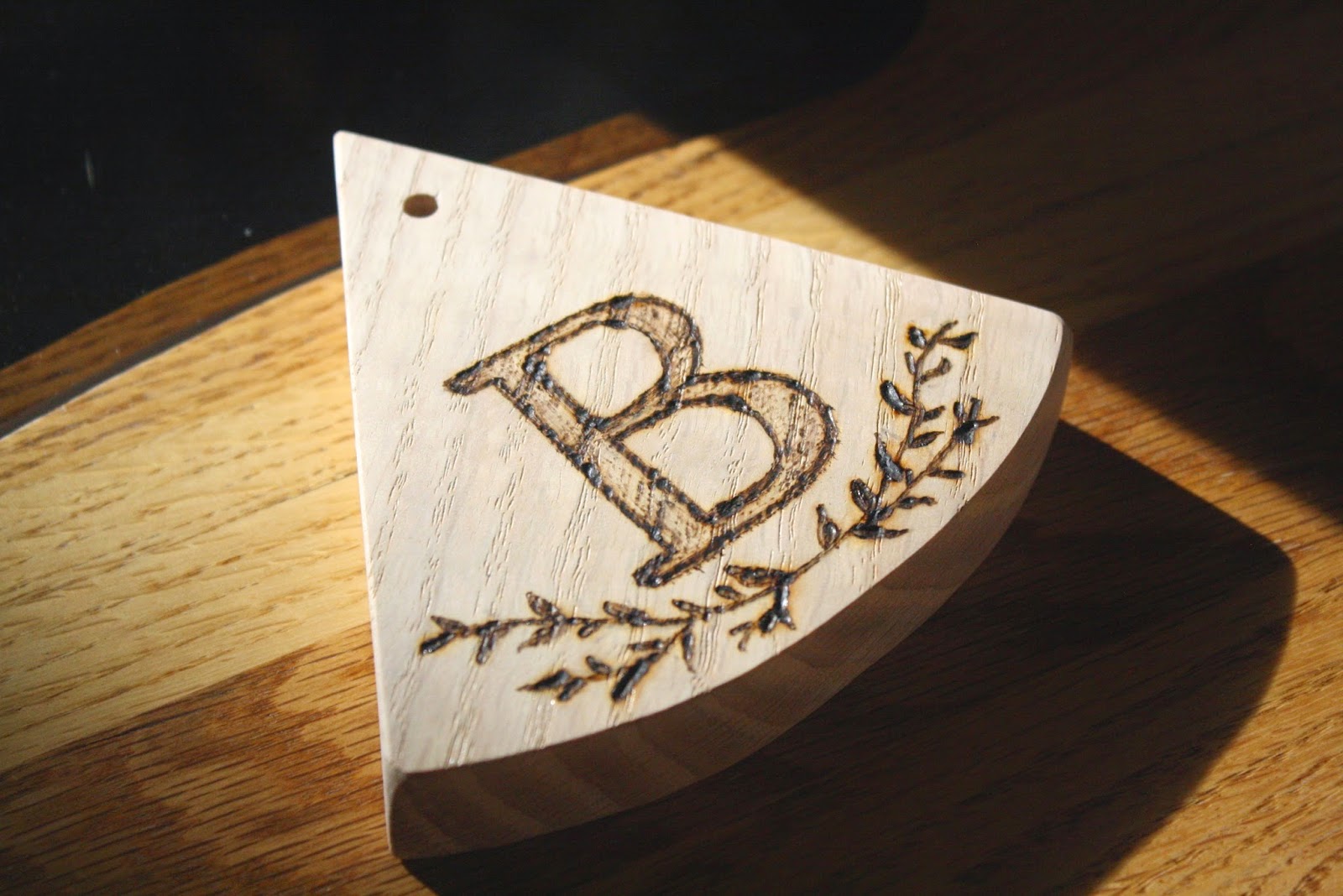 Finally, a triangle of wood was cut for the center weight and I chose to burn his surname initial into the wood; I remember one of my brothers having a wood burning kit growing up (wonder what happened to that thing?) and I thought it was totally cool...so I picked one up and went to town on the wood. 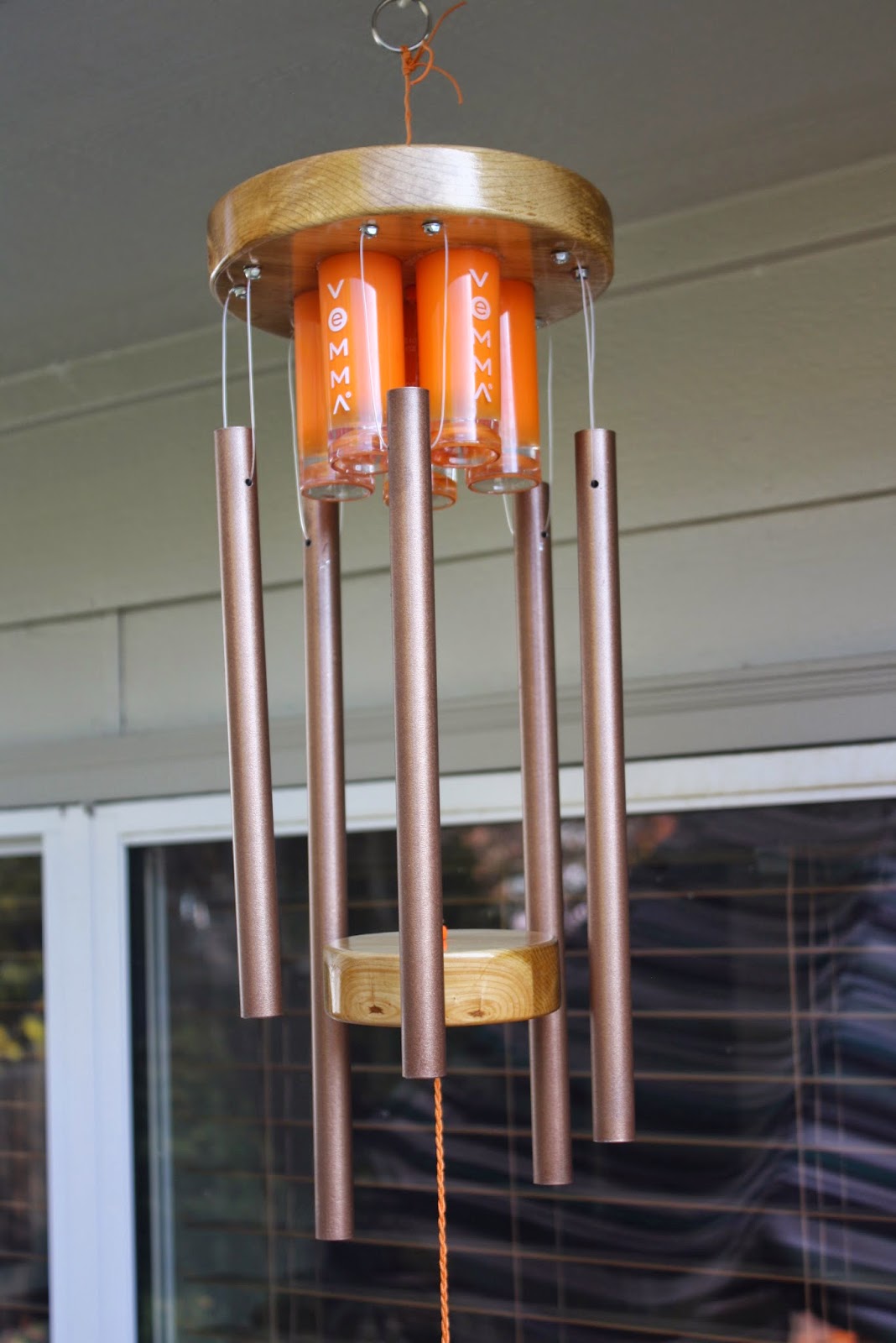 We bought the string/cord at Hobby Lobby,,,,,they have a ton of different colors and weights to choose from. The tubes are actually strung with fishing line .....while I originally wanted to use colored string, my husband was concerned that over time the sharp edges on the drilled holes would fray the string/cord so we opted for a more durable option.  I have to tell you that was the third option.

It took us three attempts to get to the fishing line.  The first attempt we used coated picture hanger wire; it was way too stiff and the chimes didn't hang nicely. Then we tried brass chain link--now that looked really sharp; but it negatively impacted the sound of the chimes....so after "googling", I found that many folks used the fishing line approach.

So those are the components.... this truly was a "his and hers" project through and through.  I think it was fun (my husband might have a few other choice adjectives), I learned a lot about the mechanics of the wind chime that's for sure.

All-in-all, for the first attempt at a wind chime, I think it looks awesome!  Even better.....the gift was a total hit with our son-in-law!!