It's a special bonus when you find a tasty recipe that is also super easy.   Just a few minutes of prep time, then all the ingredients go into the same pot and you're ready to eat a quick 15-20 minutes later! Now that I see how quickly a yummy one pot pasta meal can all come together, I'm going to have to experiment with some of my own varieties! 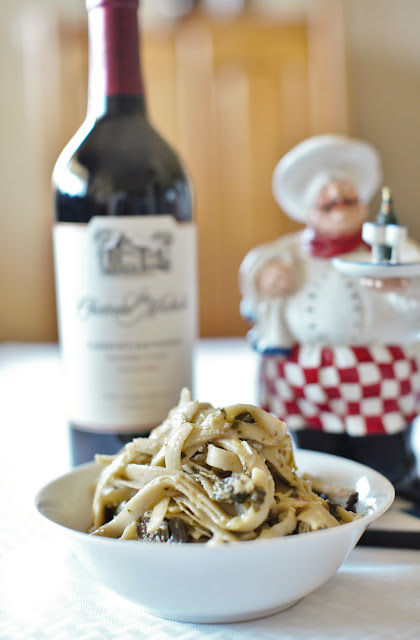 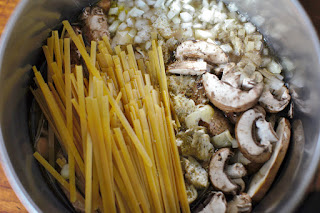 * The original recipe called for 4 cloves of garlic (I scaled it back for my husband's taste).  It also called for 5 cups of vegetable broth; it was a bit soupy, so I suggest just one of the large containers of broth.

1.  Rinse the mushrooms.  Slice thinly.  Drain the artichoke hearts and roughly chop them into bite-size pieces.  Thinly slice the onion and garlic.

2.  Place the vegetable broth, olive oil, mushrooms, artichokes, onions and garlic in a large pot.  Break the fettuccine in half and add it to the pot along with the oregano, thyme, and some freshly cracked pepper.  Push the ingredients down under the broth as much as possible.  Place a lid on the pot and bring it up to a rolling boil over high heat.

3.  As soon as it reaches a boil, stir the pot to evenly distribute the ingredients and prevent the pasta from sticking.  Turn the heat down to low so the pot is just simmering.  Allow to simmer with the lid on for 15-20 minutes, or until the pasta is tender and most of the liquid has been absorbed.  Give the pot a stir every few minutes.

4.  Once the pasta is cooked through, add the frozen spinach.  Allow the heat from the pasta to thaw the spinach.  Stir the pot to help break up the clumps of spinach as they melt.  Serve hot.