As you read from my previous post,  my husband and I were working with birch bark sheets we had purchased to build the wedding cake platter.   Since I had some "leftovers", I decided to make a little something for my daughter and her fiance' just for fun.  What's even better....I didn't purchase a single thing for this project; I actually had everything on hand from assorted projects I had already made. 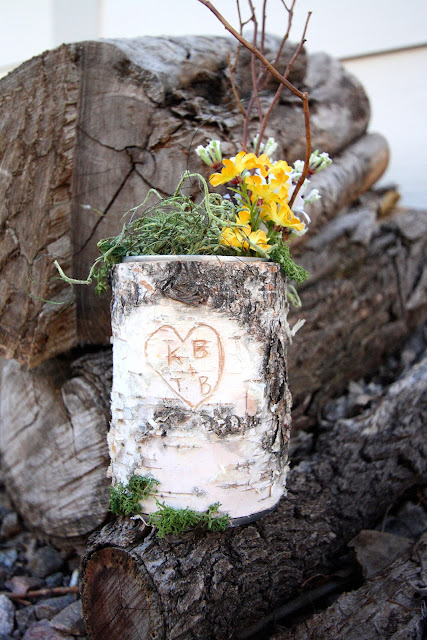 In addition to the leftover bark scraps, I used an empty tin can that was headed for the recycling bin.  I pulled off the label and washed out the can and promptly got to work gluing the bark around the perimeter of the can. 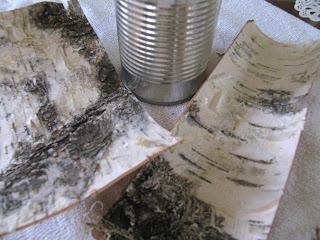 Once that was finished and the seams were painted (see the post on the cake platter for the technique used), I drew the heart and initials onto the can with a pencil and carved the initials into the bark using an exacto knife.

After that I stuffed the can with styrofoam I had on hand, I glued some moss/greenery to the styrofoam and also added a bit of moss to the bottom edge of the can.    Then, it was a matter of adding some flower and twig leftovers (press them firmly into the styrofoam and hot glue as needed to hold everything securely into place).   That's all there was to it.